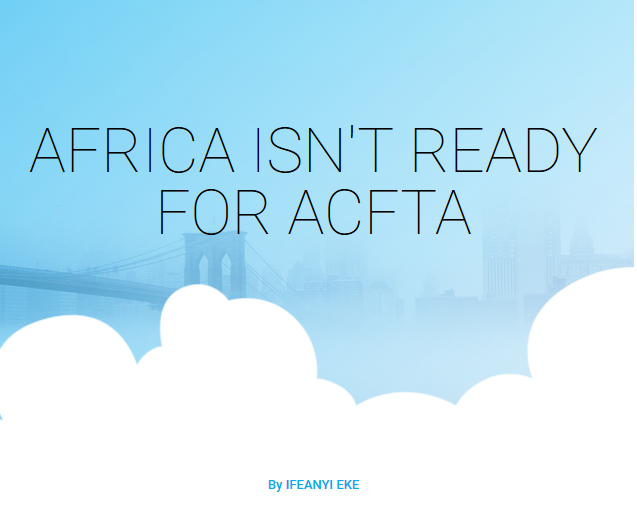 The decision to establish a continental free trade by the African Union with the aim of having a single continental market for all 55 member countries through elimination of import duties and reduction of tariff barriers, encouraging free movement of business persons and investment has been hailed as a great move in promoting free trade and boosting Africa’s economic growth.

A report by the South African Institute of International Affairs (SAIIA), published in May, has shown how the slow development of e-commerce across the continent will be a hindrance.

Reporting e-commerce as a major challenge isn’t surprising especially when a digital payment system is one of the operational instruments by which ACFTA will be governed and certain factors indicates why Africa’s e-commerce isn’t in good shape for this trade.

First is the weak data management and security system. Data privacy is a sensitive issue and there is lack of trust in the system owing to the constant data breach and theft in African countries leading to less patronage of the platform. As at 2018, a policy briefing by CIPESA showed that just 16 of 55 African countries have data protection laws.

Weak technological infrastructure is another case in point. While it’s on an increase, the access to mobile phones, internet with cheap data rates and number of online payment platforms across Africa is still relatively low with the use of cash still dominant leading to a low trend of online purchasing.

While the SIIA report engages e-commerce as a major challenge and potential trade booster, there are certain aspects that needs attention as they pose threats to the success of the agreement if not addressed.

Manufacturing and Rules of Origin. Simply put, rules of origin refer to the criteria for determining the origin and nationality of goods. Questions as to what kind of goods are open to this free trade matters. Is this free trade exclusive to any good produced within the continent considering the large influx of multinational enterprises in the manufacturing sector in Africa, thereby spurring the narrative that the greatest beneficiaries will still be the large foreign enterprises who gets easier access and more competitive advantage to displace the indigenous infant industries in the continent? Or will the privileges be exclusive to the locally owned companies?

No matter the answer to the above questions, the need for Africa to embrace rapid industrialization at all costs can’t be overemphasized.

Many member countries are parties to many bilateral agreements and multiple trade organizations with different stipulations making it difficult to have uniform policies that won’t lead to clash of interests. Nigeria, for example, asides being party to different regional and international trade agreements, is also party to bilateral trade agreements with over 30 countries.

According to UNESCO, sub-Saharan Africa has the highest rate of education exclusion globally while the world bank states that 87% of children lack foundational skills for the 21st century dynamic labour market making it a huge problem if we are to talk about up-skilling for this new trend of commerce.

Why poverty in Africa is reducing gradually, it’s not still certain that it is at a satisfactory point. Research shows that complex market systems such as cross-border digital commerce thrives on purchasing power stemming from growth of the middle class.

In essence, ACFTA indeed offers a long-term growth for the continent if properly planned so it doesn’t end up a mirage like trade blocs such as ECOWAS.

There should be uniform laws across all members that ensure data privacy and security. Member countries need to review their trade agreements and partnerships with other blocs and countries to give up some treaties or make necessary amendments if need be.

Infrastructure and logistics development should be prioritized by the AU before the project goes into full operation. Education to prepare the workforce for this new trend is vital and Africa needs to strengthen the fight against corruption and embrace rapid industrialization if issues such as poverty and lack of manufacturing diversity is to be addressed.