Recently the photograph of an alleged male rapist has been in circulation, claiming this young man has successfully victimized quite a number of innocent girls in the University of Lagos; this I believe to be dreadful (if at all the information is true). As a sign of goodwill however, the author deemed it fit to include a few admonitions to potential victims that he believes would reduce or better yet eliminate the likelihood of subsequent occurrence among which is “dress decently” (as seen below). This begs the question, does there exist a direct corollary between indecent dressing and sexual harassment? 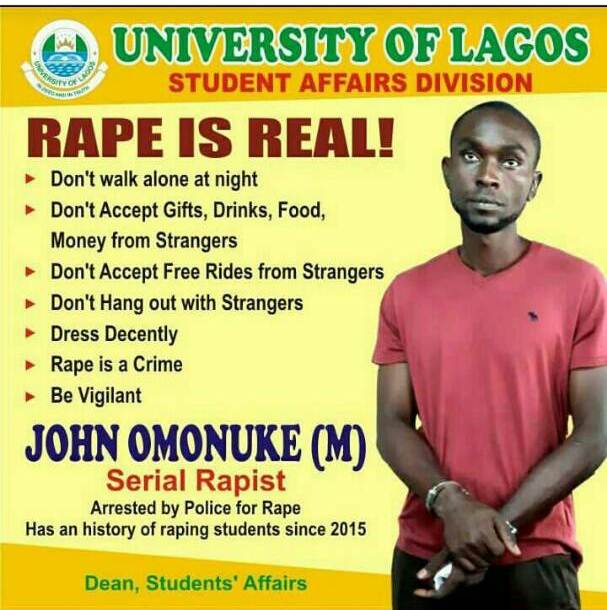 PS: In this report, Women would be repeatedly used to represent victims, this does not in any way ascribe less gravity to instances of men being harassed by women, as it is merely a figure of speech adopted for ease of flow. Information contained herein are valid for either instance.

To further demystify this issue, lets us shed a little light on the term sexual harassment and why there exist an increased tendency for Nigerians to sanction this notion. This article would not delve into the relative complacency on the side of the Nigerian Law to curb this issue. Although this isn’t exactly a good thing, the fact remains; dubbing an act illegal, doesn’t exactly serve as the most effective deterrent in this country as we see in the case of marijuana and the likes. More so, a macro level approach would prove to be more efficient as it would prompt coercion no out of morbid fear, but one that stems from a collective desire to achieve a safer society.

In broad terms, “Sexual harassment is bullying or coercion of a sexual nature or the unwelcome or inappropriate promise of rewards in exchange for sexual favors”. Some believe sexual harassment remains pervasive in our country as a function of the “transactional society” we live in, as most people you approach for help or a favor will, more often than not, ask for something in return e.g. a marketer working with a commercial bank, who visit customers in the office or even at home and end up trading sexual favors to meet their (often unrealistic) monthly sales target. This could be true, however one cannot help but wonder if the fact that our culture has thrived on deeply entrenched traits of male supremacy and patriarchy has nothing to do with.

Honestly, it would be fool hardy to justify sexual harassment as a consequence of a woman’s outfit or dressing. Although there exists a tendency for arousal by the outfit of the opposite sex, men aren’t animals enslaved to uncontrollable impulsive instincts; for there exists the ability to exercise restrain.

Doing this would be synonymous to blaming a local food seller for simply walking by a hungry man’s store. Let’s break this down, this woman has a God given right to earn a living off the food she sells, secondly, she is most likely oblivious of the fact that the man is hungry and even in the worst case where she is aware of his hungry state, it would not over rule her genuine expectation for a man (hungry or not) not to act in an animalistic manner. The moral to take home is that, society shouldn’t justify a sexual harassment by blaming the victims albeit ignoring and inadvertently condoning a selfish and illicit inability to exercise discipline on the side of the assailant.

And let us not pretend men alone possess the tendency to be aroused by the dressing of the opposite sex. Therefore, if women (on aggregate) can resist ogling men with bulging muscles, men can do the same with women who arouse their masculinity.

Sandra Shullman, Ph.D., a psychologist who specializes in harassment and hostile work environments alludes to this as she reports “Women’s wardrobes have long been used as an excuse for sex crimes, however, when you look at the data on why people rape, that doesn’t hold up,” she says. “One study showed that rapists stated clothing as the reason for their crimes but their victims were wearing a range of outfits from revealing to snowsuits. 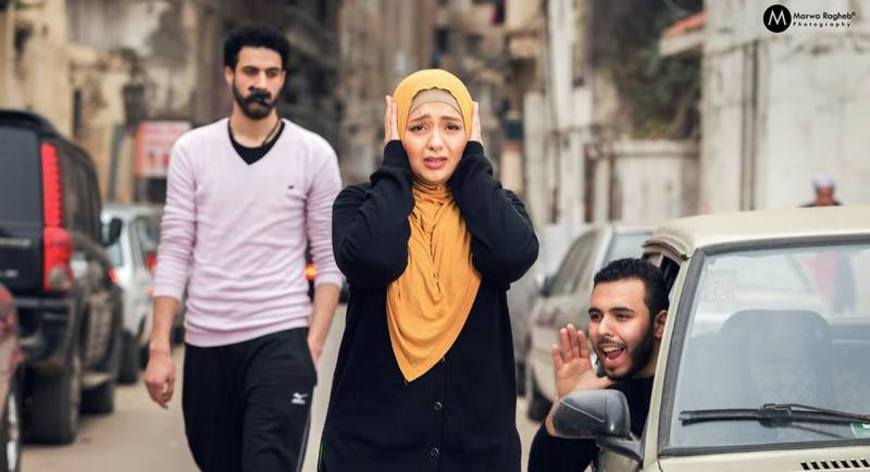 from revealing to snowsuits.

Recognize, that this does not suggest women have the right to wear “sexy” or provocative clothing to work without expecting any backlash. However, this report suggests; the only sort of backlash to be expected, is that meted from authorities within the confines of her work place, school or sanctions placed by the law.

Achieving the outright abolishment of this primitive belief would be a landmark in resolving issues regarding sexual harassment in Nigeria. Women on the one hand, would be liberated from the resulting embarrassment and the likes. With the freedom to freely express themselves in dressing and the trust that they exist in a society that upholds such liberty, they are further incentivized to increased productivity be it at school or work. Men on the other hand, would recognize the weighty responsibility place upon them and would be least likely to act promiscuously.