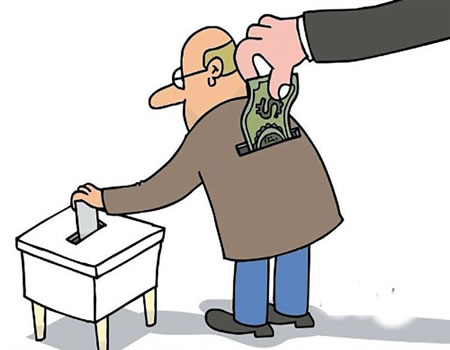 “Economic need is man’s most fundamental need. Man must eat before he can do anything else – before he can worship, pursue culture or participate in elections”. – Claude Ake, 1981.

Nigeria is arguably the most socio-economically unequal society in the world. The fact that the top two richest persons in Africa are Nigerians, boasting a combined net worth of 19.5 billion dollars, which is more than 50 percent of the total net worth of the top five richest in Africa, while at the same time 86.9 million Nigerians representing nearly 50 percent of its estimated 180 million population live in extreme poverty, overtaking India as the poverty capital of the world, aptly underlines the depth of this inequality in wealth distribution. The concern that poverty and economic inequality pose an existential threat to the Nigerian democracy has persisted and has even taken on a new urgency in recent years. It is these extremes of wealth and poverty that explains why the wealthy seeks to buy political influence and the poor are all too willing to sell their votes.

Lobbying for votes through the distribution of money, food and household items such as rice, beans, bread, kerosene, onions and so on by politicians to the electorate in exchange for their votes has historically been a feature of the electioneering process in Nigeria. However, its pervasiveness in the fourth republic means that since 1999, there has not been any election without reported cases of vote buying in Nigeria. Most recently in the Anambra (2017), Osun (2018) and Ekiti (2018) states gubernatorial elections, votes were openly sold and bought. Voters after voting showed their ballots to waiting party agents who then paid the agreed fees in full glare of everyone.

Ayodele Fayose’s comprehensive victory in the 2014 Ekiti state gubernatorial elections in South–West Nigeria popularized the philosophy of ‘Stomach infrastructure’ – an idea which suggests that the stomach is the route to the mind, particularly for the hungry, as a tried and trusted strategy for winning elections in Nigeria. And is further evidence that voters prioritize instant gratification and rewards over whatever benefits that might accrue from long term government planning.

The fundamental question therefore is; can poor people constantly preoccupied with providing for their subsistence be full and effective citizens?

On the 16th of February 2019, the Nigerian electorate would return to the polls to choose for themselves, those who would be in charge of the machinery of the state at different levels for the next four years. Sadly, political education and sensitization on the evils of selling and buying of votes is incapable of causing a significant behavioral change among the poverty stricken electorate. The only way to sustain a robust and high quality democracy in Nigeria is to create a socio -economic profile that is predominantly middle class with few people on either end of the economic spectrum, and this is a cause whoever emerge victorious at the polls must aggressively pursue. But can the economic privileged act consciously, towards dismantling the existing social order upon which their economic privilege is predicated?